Listen, Mom (or Dad!). It’s totally, absolutely worth it. Here’s why:

A 1986 Canadian study of ninety-nine mother-infant pairs showed that infants who were carried more in baby carriers cried 43% less. Forty-three percent! For an exhausted new mom struggling to figure out why Baby is crying and fussing so much, that’s huge!

According to Dr. Sears:

“In Western culture we measure a baby’s crying in hours, but in other cultures, crying is measured in minutes. We have been led to believe that it is “normal” for babies to cry a lot, but in other cultures this is not accepted as the norm. In these cultures, babies are normally “up” in arms and are put down only to sleep – next to the mother. When the parent must attend to her own needs, the baby is in someone else’s arms.” // AskDrSears.com

Anthropologists also agree that infants in babywearing cultures cry less. For this reason alone, you should consider babywearing worth it.

Everyone knows human babies are born less developed than any other mammal. Because of this, Dr. Sears recommends that you consider Baby’s gestation “as lasting eighteen months – nine months inside the womb and at least nine more months outside.”

For the first nine months, the womb regulates all of Baby’s systems. Birth disrupts that regulation. Outside of the womb, they need an “external” regulatory system. For example, bouncing along as Mom walks (just as Baby did in the womb) calms Baby. Hearing Mom’s heartbeat helps regulate Baby’s heartbeat.

Parenting is so much easier without worrying about Baby’s anxious thumb sucking or irregular breathing, and having to wake constantly because of disturbed sleep is hard!

Having a smarter baby isn’t an end unto itself, but babywearing has been shown to enhance speech development. Dr. Sears writes, “Because Baby is up at voice and eye level, he is more involved in conversations. He learns a valuable speech lesson – the ability to listen.”

If your baby can communicate with you earlier on, you’ll have a MUCH easier time parenting!

For example, by fifteen months my little one had a vocabulary of about one hundred words and could tell me exactly what she wanted to eat, where she wanted to go, when the bath water was too hot, when the food was too cold, or if her shoes or clothes were bothering her.

That made life so much easier! And, yes, hubby and I wore her in a woven wrap or carrier for most of her first year. We still wear her daily as a toddler.

What kind of carrier should you buy?

You have several wonderful options.

It’s just a large piece of fabric, but as such it has the most flexibility. The cloth is sturdy (stretchy fabric will start to sag, leaving baby in awkward and unhealthy positions) and you have the control you need to shape it perfectly around you and Baby to make sure Baby’s positioned just right. 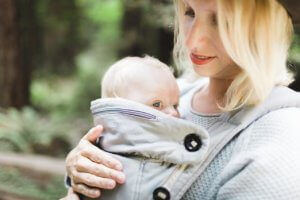 It’s a four position, adjustable buckle carrier that’s easy to use and fairly easy to take on and off.

This one is a sort of cross between the two above. It’s all fabric (no buckles) with a rectangular panel that fits nice and snug against baby and four straps, two four the waist and two for the shoulders.

All ring slings are one shoulder carriers so they’re not always great for long periods of time, but they’re fast to put on and very easy to use. Great to keep in the car for grocery store runs.

Whatever you choose, babywearing is great for both you and Baby.