Menu
Home
Health & Nutrition
The Stages of Smiles: What Your Baby’s Grin Says 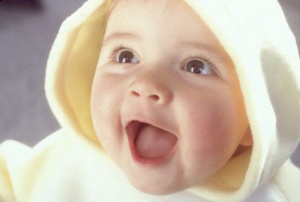 What’s in a smile? A lot, according to recent studies that present three categories to classify a baby’s smile. Researchers reveal that children aged 0-2 give social, anticipatory and spontaneous grins that serve as the window into their psyche.

The Spontaneous Smile
These joyous moments usually appear when newborns are fast asleep. Parents will often see their little ones flash a smile while resting and think, “They must be having a good dream.” In actuality, scientists believe that newborns release spontaneous grins because of their inability to control the portion of their brain that regulates smiles. Such sudden “happiness” disappears with time as little ones learn to control their actions better.

Smiling for Social Purposes
You smile at the baby, and the baby returns the positive energy with excitement of his own. This is known as social smiling. Outside stimulus, such as excitement from another child or the voice of an adult they know, influences the baby to react in a similar manner. Newborns begin to engage in social smiling at around six weeks.

Anticipatory Smiles
It is at the six month stage that little ones begin to integrate their expressions with feelings. No longer will your baby release a grin during nap time without purpose, and smiling just because someone smiles at them will not happen as often anymore. Little ones will begin to reserve their excitement for big events such as receiving new toys are having a party thrown in their honor.

Which stage of smiling has your child reached?