Menu
Home
For Parents
Which Gender is Easier: Boys or Girls?

Are boys easier to raise than girls or is it the other way around?

More often than not, I hear that girls are more difficult to raise than boys. Statements like, “they’re so emotional,” or, “they’re so dramatic,” typically follow. Those comments make me cringe for many reasons. Not only do I disagree, but I also hate that girls are taught that their emotions are a bad thing. There is nothing wrong with being emotional!

I also hate that we put these labels on children, predicting what they will be. Yes, temperament does tend to follow a male or female pattern, but we shouldn’t be so quick to throw them in a particular box.

At the same time, there are physiological differences between the sexes that dictate which tend to be harder in particular categories.

Since girls are better at differentiating between the style of communication directed toward them, they have an easier time accepting praise, scolding, and responding to direction. Boys, on the other hand, may struggle to focus.

Family therapist Michael Gurian, author of “Nurture the Nature”, points out that boys are more tactile, less verbal and more impulsive. This can result in shouting until you’re blue in the face to a boy running circles for no apparent reason.

It can be thoroughly exhausting. 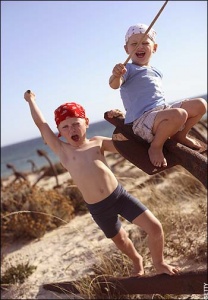 I can personally attest that this isn’t an all-or-nothing category. While boys (mine included) are the ones who tend to take a no-fear approach, there are plenty of girls (one of mine included) who live life the same way. In other words, the tendency to scale a wall, fall hard, and then go back and scale the wall again, can happen with boys or girls.

If you’ve ever been around young boys, you’ve probably experienced the phenomenon that is an inability to sit still. That phenomenon not only results in restless, crazy behavior, but it can also result in plenty of injuries.

British psychopathologist Simon Baron-Cohen believes that here, too, “males’ relative lack of empathy may play a role since they’re less likely to grasp the harm that may come to the person on the receiving end of their high jinks.”

Unfortunately, girls get the short end of the stick on this one. A combination of a nurturing personality and the culture we live in results in lower self-esteem.

Developing a healthy self-image is critical to all kids. But as the more compliant and people-oriented gender, girls tend to grow up less confident and more insecure than boys, researchers say. Famed gender researcher and psychologist Carol Gilligan, Ph.D., calls this “the tyranny of nice and kind”—unwittingly raising girls to be people pleasers. — Parenting.com.

Both sexes may struggle with self-esteem issues, but girls also have the added pressure of body image as they get older. Parents of girls have to be careful in how body, diet, and exercise are spoken about within the home.

Children who struggle to sit still don’t do well in a sit-in-a-desk, controlled environment, so boys can have a more difficult time. This doesn’t mean that all boys struggle in school or that all girls have no problems. But when it comes down to a straight comparison, the confines of school — especially ones in which physical activity is being phased out — favors girls.

This is a matter of perception, but girls are typically more high maintenance from an emotional standpoint.

“My 5-year-old daughter can go from smiles to tears and back again in the time it takes to eat dinner,” says Lisa Young, a Chicago mother of two, in an article on Parents.com. “Every meal is high drama. Her 10-year-old brother, on the other hand, has never been interested in doing anything more than wolfing down his food and getting back to whatever he was doing.”

Taking the Challenge out of Challenging Behavior

I love the way this article paints a positive picture of these gender traits:

Is he loud and rowdy?

The upside: Your son is physically active and outgoing, two qualities that will stand him in good stead when he’s older. To keep the behavior from driving you crazy in the meantime, kid-proof your house and make sure he gets a good airing out at the park every day. If you’ve got a backyard, require a certain amount of outdoor playtime.

Is she always wheedling and trying to talk you into changing your mind?

The upside: Your daughter is persistent, and her verbal adroitness may turn her into a very skillful attorney one day. Until then, try to maintain your cool and do not yield, no matter how fiercely she argues. Instead, engage her in conversations on topics that you both find interesting.

Does she break her delicate toys or take them apart?

The upside: Your daughter may be trying to figure out how they work, a sign of intellectual curiosity. If so, there are toys designed just for this purpose. If it’s simply the joy of smashing that she’s relishing, box them up until she’s ready to keep them intact as she plays.

Which is it? Are Boys More Difficult, or is it Girls?

I believe wholeheartedly in the “grass is always greener” mentality. We see the upside in the situations of others while our own situation seems especially tough.

I also believe that our own personality and temperament play a huge role in which sex we consider easier. I have a dramatic, overly-emotional five-year-old daughter and a hyper, rough-and-tumble three-year-old boy.

As a parent, I have an easier time dealing with cerebral challenges rather than trying to pin down a child who is bouncing off the wall. So I would say my daughter is easier for me to handle, but that has more to do with me than my children.

What’s your take on the subject? Let us know in the comments section below. How To Store and Use Breast Milk Safely: Your Exclusive Guide
Read full article